So, disclaimer other settings may have less of an effect

Here we see a steep decrease in measured OD and noise when stirring is turned off in the 10mL condition, but not a noticeable difference in the 20mL condition.

However, going from 10mL to 20mL does seem to decrease measured OD fairly significantly. A substantive decrease in noise between 10mL with no stirring and the 20mL conditions was not observed. 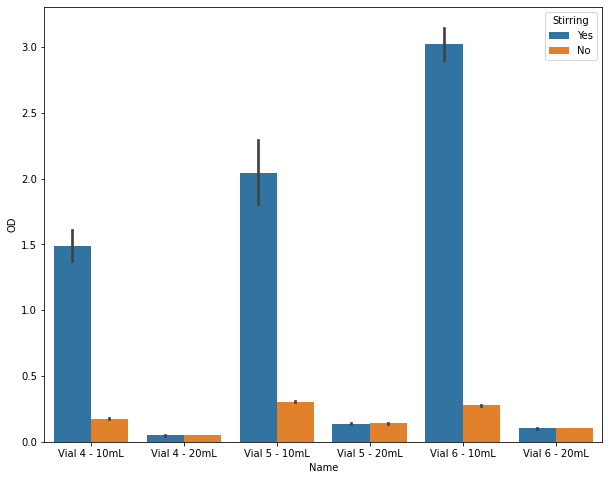 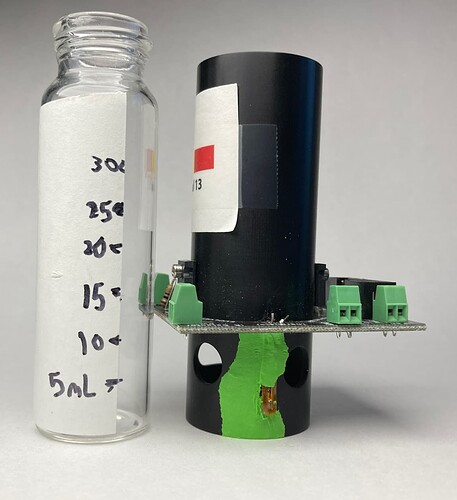 Conclusions
Stirring at low culture volumes increases measured OD value and error. This is likely due to:

In low culture volumes, we can also expect an increased calculated OD. This is likely due to:
The air-water interface being right next to the photodiode and LED, acting as a mirror and causing more reflection into the photodiode.

I think the vortex from the stir is the main thing causing the issue here. If you need lower volumes in the standard eVOLVER culture vial with OD measurements, do not go below 10 mL and be sure to turn the STIR off for ~20s before taking an OD measurement to allow enough time for the SAMD21s to collect clean data.

Thanks for the write up! It’s great to have these details documented.

Thanks Nate, this is good to document. One way to get around this is the coordinate toggling of stirring with OD measurements.

Yep that’s what I ended up implementing! This is now much easier with the addition of ‘pre’ and ‘post’ commands in the conf.yml file and its support in evolver_server.py.

Now you can run any arbitrary subcommand before and after running your main command. In my case, I turn stirring off for OD readings and back on after.

The reflection into the photodiode is needed to detect it fast and reliable. I needed to know how does a photodiode works to applicate it with proper specs.

Could you clarify what you mean? Are you saying this post helped you or that you need more information?

What Nate is documenting here are the means by which light is reflected into the PD from sources other than cells that introduce noise into the signal, namely the effect of the stir bar vortex and water surface. While we do want light to reflect into the PD, we would like that light to be primarily correlated with cell density, hence the need to keep cell culture volumes above the minimum level of the photodiode + vortex depth. Hope that clarifies the post above.